Bigger than a hamburger 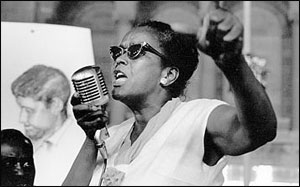 Raleigh, NC — The Student Leadership Conference made it crystal clear that current sit-ins and other demonstrations are concerned with something much bigger than a hamburger or even a giant-sized Coke.

Whatever may be the difference in approach to their goal, the Negro and white students, North and South, are seeking to rid America of the scourge of racial segregation and discrimination — not only at lunch counters, but in every aspect of life.

In reports, casual conversations, discussion groups, and speeches, the sense and the spirit of the following statement that appeared in the initial newsletter of the students at Barber-Scotia College, Concord, N.C., were re-echoed time and again:

We want the world to know that we no longer accept the inferior position of second-class citizenship. We are willing to go to jail, be ridiculed, spat upon and even suffer physical violence to obtain First Class Citizenship.

By and large, this feeling that they have a destined date with freedom, was not limited to a drive for personal freedom, or even freedom for the Negro in the South. Repeatedly it was emphasized that the movement was concerned with the moral implications of racial discrimination for the "whole world" and the "Human Race."

This universality of approach was linked with a perceptive recognition that "it is important to keep the movement democratic and to avoid struggles for personal leadership."

It was further evident that desire for supportive cooperation from adult leaders and the adult community was also tempered by apprehension that adults might try to "capture" the student movement. The students showed willingness to be met on the basis of equality, but were intolerant of anything that smacked of manipulation or domination.

This inclination toward group-centered leadership, rather than toward a leader-centered group pattern of organization, was refreshing indeed to those of the older group who bear the scars of the battle, the frustrations and the disillusionment that come when the prophetic leader turns out to have heavy feet of clay.

However hopeful might be the signs in the direction of group-centeredness, the fact that many schools and communities, especially in the South, have not provided adequate experience for young Negroes to assume initiative and think and act independently accentuated the need for guarding the student movement against well-meaning, but nevertheless unhealthy, over-protectiveness.

Here is an opportunity for adult and youth to work together and provide genuine leadership — the development of the individual to his highest potential for the benefit of the group.

Many adults and youth characterized the Raleigh meeting as the greatest or most significant conference of our period.

Whether it lives up to this high evaluation or not will, in a large measure, be determined by the extent to which there is more effective training in and understanding of non-violent principles and practices, in group dynamics, and in the re-direction into creative channels of the normal frustrations and hostilities that result from second-class citizenship.

[After SNCC's founding conference at Shaw University in Raleigh, NC, Ella Baker wrote the above article that summarized the address she gave at the conference.]